La Haine 20 years on: what has changed?

La Haine, the controversial 1995 drama that held up a mirror to the social ills of modern France, arrived during a dark time in the country’s history.

Twenty years on, with a sequel mooted and France again experiencing uncertain times, we reflect on the film’s lasting significance 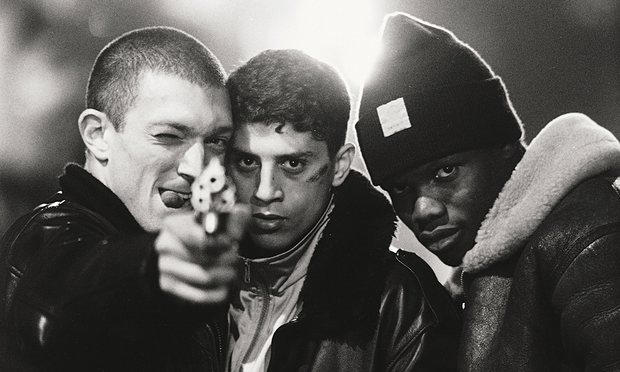 At a distance of 20 years, it’s now easy to forget that 1995 was one of the darkest and strangest years in recent French history. In the UK, it had been an exceptionally warm summer, and for a brief moment the whole nation seemed to bask in the sunshine glow of Britpop – culminating in the daft battle between Blur and Oasis for the No 1 spot in the singles chart in mid-August. In France, however, it was a very different story.

First, that summer France had been shocked by a wave of mysterious shootings and bombings, which may or may not have been linked to the civil war then raging in Algeria. The worst of these was on 25 July, when a bomb exploded at the Saint-Michel métro station in the heart of the Latin Quarter of Paris. The bomb went off at the height of the rush hour on the RER line, killing eight people and injuring 80. This bombing at Saint-Michel was followed three weeks later by a bomb at the Arc de Triomphe, injuring 17 people. There were then bomb threats throughout that long and tense autumn.

The constant threat of violence was matched by a wave of massively disruptive strikes provoked by prime minister Alain Juppé’s austerity measures. The country was effectively paralysed all the way up until the end of 1995 – nothing seemed to work, from trains to buses to all kinds of public services. I can remember flying to Manchester from Paris on Christmas Eve that year, leaving behind an almost empty airport, and a morose country. It was one of the few times that I have left Paris feeling glad to be out of it.

It was not all fear and misery however. This was also the year a new film had crash-landed into the French imagination, becoming ultimately a worldwide hit. The film was called La Haine (Hate) and was the story of three young men in one of the wretched housing projects outside Paris, commonly referred to as la banlieue. The three lads were a north African, a black guy and an eastern European Jew – an echo of the multiracial mix that would bring France victory in the 1998 World Cup. They were cheeky, funny and likable – a gang of what the French call “branleurs”, which is literally translated as “wankers” but really means young guys who mess about. The core of the story was, however, that they were also full of rage – against the police, but ultimately against a society that has pushed them to the margins. Much of the film’s comedy as well as its social comment comes from the gang’s misadventures in central Paris, a world as distant and alien to them as America.

The plot is relatively simple, centring on the fact that Vinz, the angry young Jew, has got hold of a gun stolen from the police. He threatens to use it against them if his mate Abdel dies from his injuries after being held in police custody. When Abdel does die, Vinz’s moment for revenge comes when he has the chance to kill a neo-Nazi skinhead. He backs away, however, and finally hands the gun over to Hubert, the black boxer who is the most philosophical of the gang and totally against violence. The film ends with Vinz being accidentally shot dead by a policeman, who is taunting him with a gun. The shocking and powerful final scene is a standoff between Hubert and cop pointing guns at each other; the scene is framed by the traumatised face of Saïd, the north African member of the trio, and a voiceover saying that this is the “story of a society falling apart”.

This was dazzling cinema but most importantly, it was the first time the banlieue had ever been represented to a mainstream French audience. The film was an immediate and massive hit and galvanised the part of France that knew the banlieues existed but had never seen them up close or dealt with in a sympathetic way. The director of La Haine, Mathieu Kassovitz, was then only 26 years old, but he had somehow managed to rewrite everything that people thought they knew about French cinema.

Kassovitz was fearless too. When the film premiered at the Cannes film festival – where it was a huge critical success – the police on duty turned their backs on Kassovitz and his crew, perceiving the film as an anti-police polemic. Kassovitz swaggered his way through the storm. Inevitably, Jean-Marie Le Pen, then leader of the Front National, stormed into the fray, calling for “these yobs to be sent to jail”. Kassovitz shrugged off the criticism. The fact that Alain Juppé organised a special screening for his cabinet more than proved the point: that in 1995 La Haine seemed to describe exactly what was wrong with France. In one of its blackest years, it seemed both to capture the mood of the country and turn it into great art

This was why, on a bright and sunny Wednesday morning in March, I found myself in the market place of Chanteloup-les-Vignes, drinking mint tea and chomping on a Moroccan doughnut called a sfenj.

This was the banlieue where La Haine had been filmed, and I was here with my friend, producer Geoff Bird, to make a Radio 4 programme, Twenty Years of Hate, looking back at what it meant. Our starting point was that the film could not have been made without the people around here, many of whom had featured in the film. We wanted to know how they felt about the film, its historic significance, and what, if anything, had changed since then.

It takes about an hour on an RER from Paris Gare Saint-Lazare to Chanteloup-les-Vignes. The first thing that strikes you as you leave central Paris is how pleasant everything seems, at least at first sight. In the early 20th century the banlieues were a source of pride to the working class, who were often glad to have been evacuated there from the slums of the city centre. You can see this pride at work in the gardens, cobbled streets and cosy villages on view from the train.

And then, when you arrive, it all starts to feel a bit weird. This is mainly because Chanteloup is a cheaply built piece of 1960s brutalism, grafted on to the French countryside. Like nearly all of the most notorious French banlieues, it has the queasy artificiality of a science-fiction set. This strangeness is captured in the film when Vinz, who is not sure if he is stoned or not, sees a cow wandering through the estate’s concrete alleyways. Weirder still are the giant frescoes of the poets Rimbaud, Baudelaire and others that dominate the market square. These were well-meant gestures of cultural aspiration from the 1960s – but today the effect is Orwellian, like a big picture of TS Eliot glowering down at you in Tower Hamlets. I asked my newfound mates at the sfenj stall if they recognised the images and whether they meant anything to them. They all shrugged with indifference. “To us, they’re just like a cultural Gestapo,” said Abdel Moulah Bouloudji, who featured in the original film. “Nothing to do with us.” 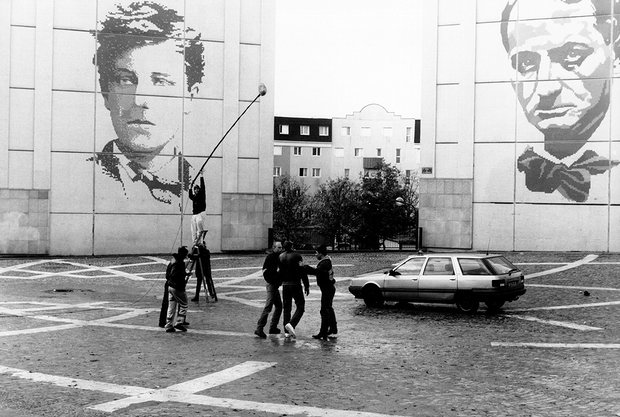 Shooting the movie La Haine, with the giant frescoes of Rimbaud and Baudelaire that decorate Chanteloup-les-Vignes. Photograph: Gilles Favier/Agence VU

Having said that, everyone we spoke to was immensely proud of La Haine, that it had been filmed there and that they could claim some link with French history. “For us, La Haine was like speaking out for the first time, letting the rest of France know that we exist,” I was told by a bloke well into his 40s (he wouldn’t give his name). I asked him if he had taken part in the original riots in the early 1990s which had inspired the film. “Of course I did,” he said, “We all did.”

Abdel took it upon himself to show us around Chanteloup, pointing out where key scenes had been filmed and what had changed since 1995. There were two new important new buildings – a shiny and impressive new mosque and a state-of the-art gym. This was where Abdel gave us a display of his kickboxing skills: “Fuck tha police!” he declared with glee in English, as his boot crashed hard into a dummy.

I asked Abdel how much had changed since 1995. “Nothing much,” he said. We talked about the riots here in 2014, which were every bit as serious and confrontational with police as those of 1995. As we chatted, we were followed by unmarked police cars, sharking between the narrow avenues of the area. Youths stood look-out for the drug gangs at the edges of apartment blocks. “It’s still here,” he said. “It’s all the same.”

Except that it isn’t. So far in France, 2015 has proved to be as dark if not darker than 1995. In the wake of the Paris attacks of January, Kassovitz has come out and said that it is now time to make La Haine 2. This has been an unusual volte-face, given that Kassovitz has until now described La Haine as a “curse” and determinedly rejected suggestions that he should make a follow-up.

The consensus back in Paris, however, is that this wouldn’t be a follow-up in the conventional sense but rather a much darker version of what was already a tough film. In the banlieue of Bobigny I spoke to Gilles Favier, the photographer who had worked on the original film. He was clear about what had got worse in the banlieue. “In 1995 I had my doubts whether a black guy, a Jew and an Arab would be friends,” he said. “But now everything is much more divided. And this is because of the rise of political Islam in the banlieue. This is what created more division and tension and so now it is not just youth against the police or the state, but also youth who are wanting to kill Jews and go to Syria. La Haine was about friends and maybe some hope. Nowadays I think you could only make a film about despair.”

Favier, an old-school Marxist, has a point. Political Islam does not appear at all in La Haine. Even in 2005, when the French intelligence services conducted an investigation into the riots of that year, they regarded Islamism as a negligible presence in the banlieue. The Charlie Hebdo massacre earlier this year demonstrated that this is no longer the case.

As for La Haine, it’s ironic that a film once held up as the mirror of all French social ills now seems to be, in retrospect, a document from a golden age. But these are difficult and dangerous days in France – and all the more the reason why La Haine 2 is awaited with bated breath.