Sergei Sergeyevich Bodrov (Russian: Sergéi Sergéevich Bodróv; December 27, 1971 – September 20, 2002), also known as Sergei Bodrov, Jr. was a Russian actor who had lead roles in the films Brother, Prisoner of the Mountains, The Stringer and Brother 2. He was the son of the Russian playwright, actor, director and producer Sergei Bodrov. He was killed in the Kolka-Karmadon rock ice slide at the end of the second day of shooting of his film The Messenger. 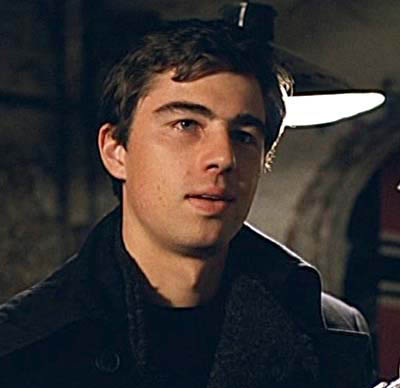 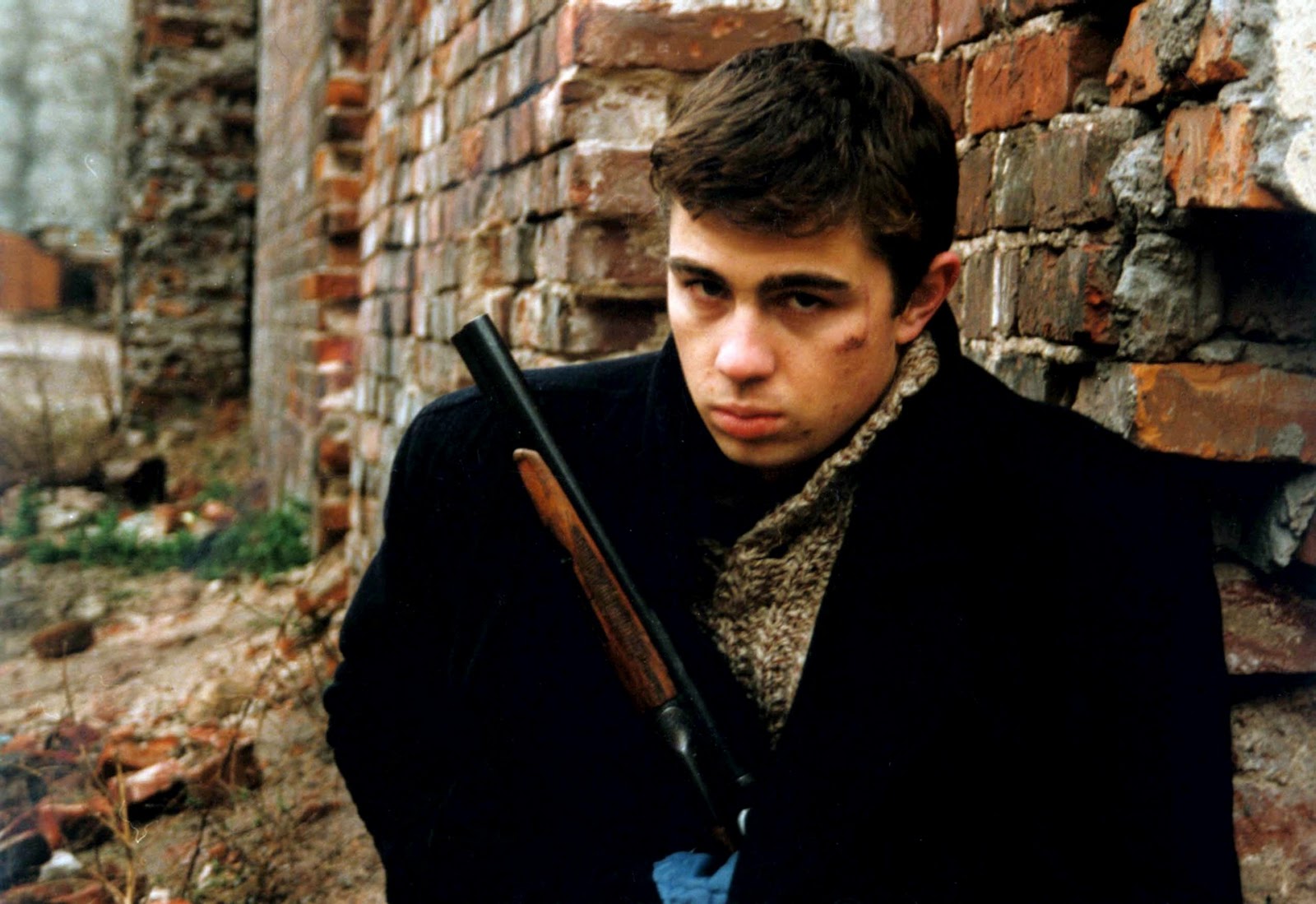 Sergey Bodrov was born on December 27, 1971 in Moscow, Soviet Union. His father was a famous film director, Sergey Bodrov, and his mother Valentina Nikolaevna was a fine art expert. Sergey Bodrov Jr. believed that "childhood is the most important and the most amazing time in life." and what you'll become happens in the first sixteen years". Various publications report that Bodrov wanted to become a garbageman and drive an orange car.

Bodrov wrote about his early years and events which influenced his world view in a "Composition on the Theme: Eight Events which Influenced Me, or How I Grew Up to Be a Good Person."

Sergey Bodrov attended the special French language School № 1265, where in December 2012 a memorial plaque was installed in his memory.

Bodrov wanted to enroll in the Gerasimov Institute of Cinematography, but his father advised him that "cinema is a passion, and if you don't feel it you should either wait for it or forget about it forever." Instead, in 1989 he enrolled in the art history program in the History Department of Moscow State University, graduating with Honors and remaining for postgraduate studies, although he already knew that he would not work in a museum or library. In his own words, at the university he "learned to see beauty in the simple things around us". After becoming a famous actor and television host he completed and defended (in 1998) his graduate thesis entitled "Architecture in Venetian Renaissance Painting" and received the Candidate of Science degree.

In 1991, while still a student, Bodrov studied art in Italy, where he found work as a lifeguard and earned money to support his travels around the country. When he was asked in an interview if his education was useful in his life, he answered:

Of course. So you come to a city. What do you usually know about it? That there is a central square, some shops... And I know there is a painting in one of the museums and that you can spend the whole day in front of. And this day is added to your life.

Sergey's first cinema role was in his father's movie Freedom is Paradise in 1989. He appeared on screen only for a few minutes, playing a minor lawbreaker who was waiting for a decision on his own fate while sitting next to the main hero of the film. During his university days, he also had a bit role as a bellhop in the 1992 movie White King, Red Queen.

Prisoner of the Mountains

In 1995, his father traveled to Dagestan for the filming of his movie Prisoner of the Mountains. Bodrov asked to go with him, prepared to do any available work. Unexpectedly, he became one of the featured actors, playing the conscript Vanya Jilin, partnered with Oleg Menshikov who played the contract soldier Alexey Ryapolov. Bodrov received an award for best actor jointly with Menshikov at the Kinotavr cinema festival in Sochi.

Bodrov himself did not claim to be an actor:

From October 1996 to August 1999, Bodrov was the host of the program View (Vzglyad) on Channel One. He said that he left the show feeling it had given him a good schooling:

I became acquainted with so many people, heard so many stories, read so many letters - it doesn't happen in other jobs. It had a very positive charge. Help two or three people and the telecast has done some good. But it has to be done responsibly.

In 1997 Sergey married Svetlana Mihailova (author of the television projects "Wordsmiths" and "Canon"). In 1998 their daughter Olga was born, followed in 2002 by a son, Alexandr.

During the 1996 Sochi film festival Sergey Bodrov made the acquaintance of director Aleksei Balabanov, who invited him to the studio of STV. It was here that the movie Brother was being filmed for release in 1997. Sergey played the starring role, Danila Bagrov. The movie was criticized by the media, accused of racism and Russophobia (as a film made for foreign audiences). Bodrov himself assessed his character in the following way:

I know that Danila is often reproached for being primitive, simple and inarticulate. And in part I agree with that. But a metaphor connected with him forms in my mind: I imagine people in a primitive chaos, who sit in their cave before the fire and do not understand anything else in their life except for the responsibility to eat and to reproduce. And suddenly one of them stands up and utters very simple words about how it is necessary to stand up for their friends, to respect women, to defend one's brother.

The music to the movie was composed by the Russian rock band Nautilus Pompilius, which Sergey himself enjoyed listening to.

The movie was regarded by many as culturally significant and for many of the younger generation, Bodrov's character Danila Bagrov became a hero and a role model.

Over the course of 1998-99, Sergey played two roles. The first was the character Vadim, a wedding photographer in P. Pavlikovsky's movie The Stringer. The second was in Regis Wargnier's movie East/West, in which Sergey played Sasha, a neighbor of the central couple in the film, Dr. Golovin and his French wife Marie, in a communal apartment during the Stalin era.

In 2000, the movie Brother 2 (Brat 2) was released, with Bodrov again playing Danila Bagrov. Critics attacked the movie as they had its predecessor, saying that it expressed racist ideas, threatened national security and insulted the Ukrainian and American nations. Bodrov responded:

What was important for us was not to say that all Americans are jerks, but the opposite, that we are not freaks. This is a fairly simple idea, so it is strange that not everyone understands it.

The Americans make movies about Russians where Schwarzenegger as a policeman tears off a mafioso's wooden leg and drugs fall out of it, and bears are walking in the streets. In other words, we [Russians] are complete lame-brains. So why don't we have the right make a joke at the expense of the Americans?

That same year, 2002, Bodrov moved to California to take part in the shooting of his father's movie The Quickie. Lets Do it Fast. Sergey played Dima - the head of security for a rich American of Russian ancestry - Oleg (Mashkov).

In Bodrov's free time during the filming of The Quickie, he wrote the screenplay for his first movie Sisters. His father suggested the idea of the movie to him and Bodrov Jr wrote the screenplay in two weeks; in four days later filming began. The heart of the movie is a story of two sisters - Sveta (thirteen years old) and Dina (eight), who become inadvertent victims of their father's criminal past. Sergei had a small part for a role without an available actor. The film opened on May 10, 2001. At a festival in Sochi, it received a Grand Prix award "for the best debut" and the young actresses received a jury award for their parts.

In the autumn of 2001, Bodrov became a host of the game show The Last Hero. Sixteen people landed on an island near the coast of Panama and competed in various trials. The last participant which lasted through all the votes received the main prize of three million rubles. Bodrov conducted the game and commented on it. He gave his understanding of the telecast:

I think that the subject of hunger and physical existence will emerge in front of them very seriously. But the true survival lies in how you're strong inside, how you can keep your humanity in unhuman conditions. And this is also related to me.

The shooting of Balabanov's movie War began in the spring of 2001. Bodrov had a role of short duration (he played captain Medvedev). Opening night was in 2002. The movie got the "Golden Rose" award at the Kinotavr festival and Bodrov received the Nika Award for the best supporting role.

Bear's Kiss directed by his father Sergei Bodrov opened on November 28, 2002. Bodrov played Misha, a bear that mystically transforms into a person. Sergei's love interest in the film is played by Rebecka Liljeberg.

In July 2002, Bodrov settled down to shoot his second film, with the working title The Messenger. He characterized the movie in the following words:

Philosophic-mystical parable about the life of two friends. They are romantics, travellers and venturers. Of course there will be bandits, hostages, in general all that accompany us in life. The movie is called "The Messenger" and I'm like a coffee in a carton in it: the author of a screenplay, stage manager and performer of the leading role.

The film crew arrived in the Caucasus in September. On September 20, the scenes in a women's penal colony in Vladikavkaz where they intended to film the scenes of the main character's return from the army. At approximately 7 p.m., filming stopped due to poor lighting conditions. Then tragedy struck. According to official reports, a block of ice fell from Djimara Mountain onto the Kolka ice flow, bringing with it mud and large boulders. This mud flow covered Karmadon Ravine, where Sergey Bodrov and his crew were working. A massive search and rescue operation proved fruitless.